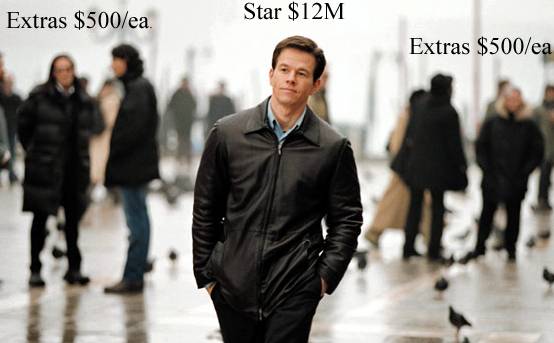 Here are the most common acting jobs for background extras in TV shows and movies.

Background extras are in nearly every TV show, movie or commercial.

You may or may not recognize them but, they are the moving furniture that brings a movie to life. Without background actors, a movie would be lifeless and a crowded train station scene would look like a strange episode of the Twilight Zone.

You may assume that all of the roles are all the same. Men and women basically get cast in the same traditional type of acting jobs. However, Bruce Nash, over at The Numbers, went through went through 160,000 acting credits from 26,000 major US movie releases dating back to the dawn of the film industry and according to Vox, here are the most common credits given to men and women in non-major roles.

The most common roles for men were law related, either a cop, sheriff, detective, and FBI agents. Other tough-guy roles include thugs, bouncers or soldiers.

However, for women it’s a completely different story.

Females are often cast in subordinate positions in comparison to men. For example, men are more likely to get cast as doctors while, women are cast as nurses and receptionists.

It is interesting to point out that, reporters are a gender neutral background acting job.

So it begs the question, why are women more likely to get cast in subordinate positions for extra roles?

Well, it is reasonable to believe that the lack of diversity in the director’s chair could be the reason. In fact, in a recent study by into on-screen diversity found that the number of movies directed by women were directed by men 92.5 percent of the time.

You can read the full report here.