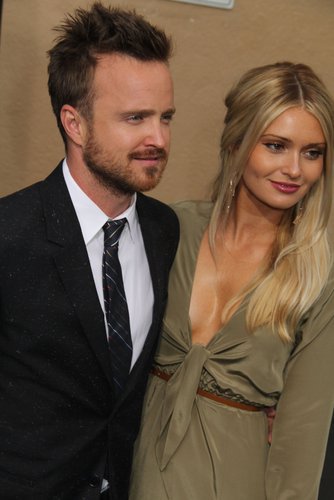 Aaron Paul became an overnight sensation after the success of AMC’s Breaking Bad. Basically overnight, Aaron Paul went from an actor’s character who was supposed to be killed off in the first season to one of the most followed actors in social media.

But, sometimes becoming famous can become a little scary. Especially, when fans start popping up in places you wouldn’t expect.

While on The Late Late Show on Monday night, the star of Hulu’s The Path recalled when he was looking back at wedding photos and realized that there were people he never met.

“We didn’t know it happened until we started looking through photos of our wedding and we saw these three strangers,” he told James Corden, admitting he still has no idea who they were. “We had a 1920s Parisian carnival wedding and these people were just in basic wedding attire, and they just stood out like a sore thumb.”

He continued, “This one girl almost caught Lauren’s bouquet. She dove for it — violently dove, you could tell on her face that she was going to get it. But she didn’t. She was close!”

Watch the video below.