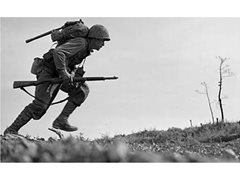 The real story based on SAS member Chris Ryan’s ‘The One That Got Away’ aka ‘Bravo Two Zero’.

Medium muscular build, fit but will need to play scenes where he has lost weight from starvation.
Must have Geordie accent and have piercing blue eyes.
Preferably has weapons and military training but must be good actor.
Warm and polite but steely and ruthless, a man in control.
A complex character.

Males, aged 28 to 32 from United Kingdom