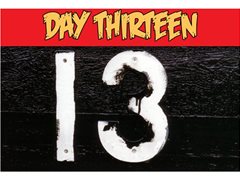 Facebook
Twitter
Google+
Pinterest
WhatsApp
13th Day
He started on the 1st of January. A young woman found dead. The number 1 carved on to her forehead. A second victim followed on the 2nd of February and the pattern continued. The number of each victim corresponding to the date.

After striking 12 times…and with the police seemingly unable to protect the people. A wave of panic and terror takes its grip as we approach day and victim 13.