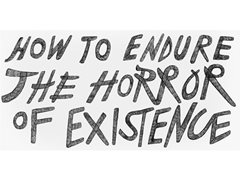 We are looking for people who are willing to collaborate on a short film with the intention for it to further the carriers of the people involved.
The story is very important to the film makers and we are trying to create something special, unique and of a high quality.

Looking for passionate people who are responsible, willing to work to get the job done and hard working.
Want to get someone on board ASAP to work with the director and producers on organising planning.

“How to Endure the Horror of Existence” –
Stuck in the dissatisfactions and disappointments of his childhood, despondent when faced with the mundane suburban pathways, Thomas finds himself kidnapped by his mentor and therapist in the woods, in need of an invitation to a heroes journey in order to find the will to live.
A tale of the wreckage of the modern crisis of masculinity

This film is about a depression, loneliness, addiction and shame. Its about the loss of role models and the taboos of true human connection in our modern culture.
We want to fearlessly address these very stigmatised issues, through a script that is an autobiographical story.