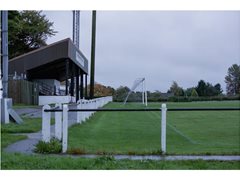 Facebook
Twitter
Google+
Pinterest
WhatsApp
I am a final year Film & TV Production student and have written my own short film ‘Scuffed’ as my main project, which I will be making with a dedicated and experienced team from the course. ‘Scuffed’ is a mockumentary-style film that centres around Rick (think David Brent, Mike Bassett, Alan Partridge and Jose Mourinho rolled into one character), the charismatic but clueless manager of non-league side Trudeberry FC who are on the verge of qualifying for the FA Trophy. The “crew” observes his team talks, tactics and training sessions leading up to the big game.

We are looking to cast 3 main male characters: The manager Rick, the team captain Paddy, and Kenny – the thuggish centre-back. Auditions will be held around the first week of December.

Rick is the charismatic but clueless manager of Trudeberry FC, who thinks very highly of himself though it quickly becomes apparent that he doesn’t have a great relationship with the chairman or players, or much idea of what he’s talking about. Script and more info available on request.

Males, aged 20 to 40 from Newcastle upon Tyne, United Kingdom