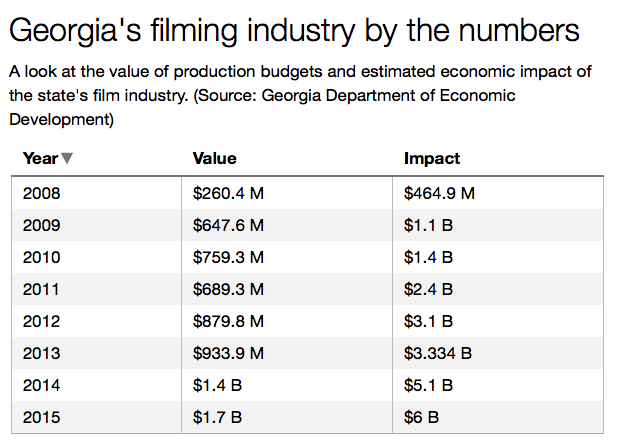 According to reports, Georgia’s film industry economic impact increased by nearly a billion dollars from 2014 to 2015.

“Over the past five years hundreds of new companies have located to Georgia to support the industry and we are very appreciative of the contributions they have made, and continue to make to Georgia’s film industry,” said Lee Thomas, Deputy Commissioner of the Georgia Film Office, said in a statement.

Currently, the highly anticipated Baywatch movie starring Zac Efron and Dwayne Johnson is now filming in Savannah, Georgia which is adding to the state’s growing film industry. In addition, Marvel is ramping up production for their block buster feature film franchise, Guardians of the Galaxy 2, outside of Atlanta, Georgia.

“The unwavering support from Gov. Nathan Deal and our elected officials, by offering a stable and consistent production tax incentive, gives Georgia’s film industry the long term sustainability it needs to continue attracting a record number of productions,” Chris Carr, Commissioner of the Georgia Department of Economic Development, said in a statement. “Our competitive incentive, combined with our diverse landscape, deep talent pool, extensive array of sound stages, community readiness, and the accessibility, are the reason why Georgia is one of the top states for film and television production.”