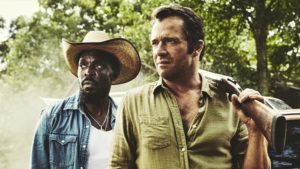 The show is about a former prisoner named Hap Collins. He served time in a federal prison for refusing to adhere to the draft policy in the military during the Vietnam War.  Season 1 starts the day Collins is released from prison.  He is now in his late 30’s and is trying to survive working as a laborer on a Texas farm.  His best friend Leonard is a Vietnam veteran dealing with severe anger issues.

Filming of the first season took place in Baton Rouge, Louisiana, although the series is set in 1980s in the fictional town of LaBorde in East Texas.  The first season ran a total of six episodes on Sundance and it performed well with critics and viewers.  On July 27th, 2016, SundanceTV renewed the show for a second season.

This is a great opportunity to appear in a new show on a prime network.  Not only will you earn money for your role as an extra, but you will meet industry professionals that will open up several new doors for you.  Making a good impression on a director or producer will go a long way in helping you establish your career.  The movie and television industry is all about who you know, and this is your chance to meet people that will be valuable to your career.