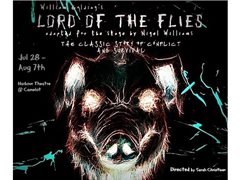 Auditions: Saturday April 16th – 9:30am to 12:30pm, 1pm to 4pm.
There will be no callbacks.
Please bring recent (colour) headshot, & completed audition form. No CV necessary.
Some audition material is available from April 1st.

“A plane crashes on a desert island. The only survivors are a group of schoolboys. At first they revel in the freedom and celebrate the absence of grown-ups.
Soon though, as the boys’ fragile sense of order begins to collapse, their fears start to take on a sinister, primitive significance – the world of cricket, homework, & adventure stories seems far away.
The boys are faced with a more pressing reality – survival – & the appearance of a terrifying beast who haunts their dreams.”

‘Lord of the Flies’ is very much a coming of age story, this stage adaptation highlighting the brutal reality of survival alone in the elements. This will be a very physical play, including fighting. Most characters will be shirtless in the second act – to indicate the passing of time. If actors, or parents of those under 18, are not happy with this, this is not the play for you.

Auditionees will be asked to read from the script, and have a chat about the characters & story. It is encouraged, but not essential, that actors interested in this play are familiar with Golding’s novel. All characters require British UK accents – for the audition any appropriate accent will be fine, some specifications later.

I will be auditioning all actors together; you may or may not get to read for all the characters you are interested in. As this is such a strong ensemble piece, while I am concerned with characters looking as they are described, chemistry between the cast is most important. Please select a morning or afternoon session time – there may be waiting around, but I will endeavour to give all actors equal opportunity to strut their stuff!

[NB: Ages listed here are stage ages only, I will be happy to audition people from 8-25 years of age].