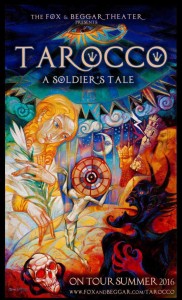 Great news for all those who have been looking for a chance to make a breakthrough performance at a theatrical show- there has been an open nationwide casting call for the lead male dancer for Tarocco published by The Fox & Beggar Theater.

The story is about an Italian soldier who is stuck behind enemy lines after failing to escape a brutal attack at Caporetto. The play is set during the era of World War I. In order to kill time, the soldier tries to console another dying comrade by making use of images of an antique deck of cards called Tarocco which are supposed to be the precursor of the modern age tarot cards. Every card fetches to the stage a strange character from the world Tarocchi. The Fool is the character who leads the story in the fantasy world of the Tarocco cards. The aerial acrobatics coupled with the circus arts and ballet dance will simply mesmerize you.

It is a paid role.

If you are interested, then please make submission at nat@foxandbeggar.com. Apply immediately without any further ado.

Information about the Tour

The rehearsals for the stage play will begin from 13th June 2016 in Ashville, North Carolina. There will be a total of 13 shows in all in the tour. The tour will start from 21st July 2016 and continue till 14th August 2016. The performances will take place in the following areas:

The foundation of Fox and Beggar, a non-profit organization was laid down in 2013. It aims to assemble puppeteers, musical artists and dancers, costume designers etc. on a single platform and bridge the gap between the artistic communities. The theater also provides training to the artists, actors, dancers and even designers who are a part of their shows.