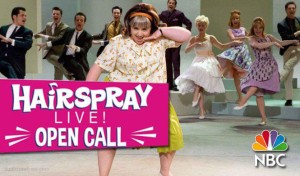 Did you know that NBC is producing a live TV musical show? The show is called “Hairspray Live!” which will be hitting the NBC screen at the end of the year on 7th December 2016. The show is currently in pre-production  and is looking forward to hire the lead character of Tracy and is holding open auditions for the role in New York City.

NBC has made an announcement that this show will be a Broadway musical show that will be aired on the network as a live TV special. NBC has previously also produced other television special shows like “Peter Pan Live” and “The Wiz Live”. It is being rumored that most of the original creative members of the previous stage production will make a comeback for the live TV special.

The musical is being produced by Neil Meron and Craig Zadan. Kenny Leon of “the Wiz Live” will be directing it. The choreography will be carried out by jerry Mitchell. Scott Wittman and Marc Shaiman will be the songwriters for the musical. Recently, other networks have begun to follow this trend. Shows like “Rocky Horror Show” and “Dirty Dancing” are also paving their ways to the television screens. “Grease Live” by FOX was also a major hit on the small screen.

So if you want a brilliant opportunity of being aired live on NBC while performing on Broadway, read on!

“Hairspray Live!” will be based upon a 1988 movie by John Waters, starring Ricki Lake who played the lead character. Another ‘Hairspray’ movie hit the theaters in 2007 in which Queen Latifah, Amanda Bynes, Zac Effron, John Travolta and Nikki Blonski starred. A stage musical of ‘Hairspray’ was shown on Broadway in between the years 2009 and 2007 as well. The musical is set in the year of 1962 in Baltimore. It revolves around Tracy Turnblad essentially who loves to dance. She is an aficionado f “The Corny Collins Show” which is like an “American Bandstand” show. She would absolutely love to come on the show and actually does end up appearing in it.

The casting directors are looking to hire a female to play the role of Tracy who becomes a teenage star. The female fitting this description should also be able to sing and dance as well. Tracy is a vibrant, lively, outgoing person she is absolutely adorable and has a passion for singing and dancing. The candidate must be 18 years old or over the age of 18 years. However, she must be able to play the role off a teenage high school girl.

Location: The audition will be held in New York City

You are required to come absolutely prepared and sing a short portion of the song “Good Morning Baltimore” without any background instrumentation being played.

Please bring a photograph along with a resume with complete contact details.

In case you have any queries, you may send an email at hairsprayopencall@gmail.com.