Title: Repercussions, The Show
Submission Deadline: Dec 10, 2016
Location: Charlotte, NC, Surrounding areas
Pay: Yes
Parts: Speaking roles.
You MUST submit ALL info. Incomplete submissions won’t be considered.
We will shoot the pilot first, then submit it for a gofundme campaign to raise money to complete the series.

Actors will be paid for their participation in the pilot. If you do a great job, you will work thru Season One (8 episodes).
This is a low budget gig. We don’t pay union fees, travel, mileage, housing or per diem. You will get a flat rate for the pilot and food on set.
Email: mingostudio72@gmail.com
Subject Line: Your Name/Age/Gender/Race/ Location/Character Name
*Submit ALL info for serious consideration**
Legal name on ID
Cell #
Age
Height/Weight
Tattoos (list location, if any)
2 recent photos of self (Full Body, Close-Up) NO Comp Cards, filters, duck faces, crazy angles, NO other people in picture.
Provide visual links to work or video uploads of monologues.

Is a wealthy wife with twin daughters. and has been married to her college sweetheart, Joe, for 16 years. Dana is pampered, sheltered and a little naive.

Dana is used to her money providing security and status.

She has passively allowed her loved ones to behave in ways that are now interrupting their lives. She goes thru a range of ideas and emotions as she desperately fights to save her marriage and her daughters.

Is a business woman who speaks her mind and gets what she wants. She is married to her supportive and loyal husband, Javier.

Raised in the streets, Milicent is not afraid to do what she has to do to protect what she has and who she loves.

The paths she crossed in the past are now coming back to settle their scores. She is best friends with Dana and auntie to Dana’s twins.
Amber (35-50)

Is a smart and creative woman who demands attention and respect but she’s a woman scorned. When she is hurt, she doesn’t fight fair. You have to watch yourself…she will stab you from the back, from the front.
Joe (late 30s-50)

Is a slick and calculated man whose been married to Dana for 16 years. His brutal honesty and demanding ways has gotten him what he wanted, no matter the cost. He’s ok with that because even though he loves his family, he loves his freedoms even more.
Javier (late 20s-40)

When he saw Milicent get bullied on the school playground in elementary school, Javier jumped in to protect her. He’s been in love with her ever since. He accepts her past and her present and stands by her side no matter what. Loyal and dedicated to his wife, Javier will eliminate anything and anybody who threatens their bond and relationship.
Nina (18-25–late teen/early college age)

The elder of Dana and Joe’s twins. Nina is like her father–ruthless, outspoken and confident. She is an observer, she watches people so she’ll know when to make her move. She wants what she wants, no matter what. Unfortunately, her youthfulness causes her to underestimate the consequences of her actions.
Nikko (18-25–late teen/early college age)

Second born twin to Dana and Joe, Nikko is treated by everyone like the little sister and weaker twin. She is bossed around, bullied and expected to do as she is told. She is a loving and quiet girl–a peacemaker–but is always underestimated.
Fille (18-25)

Comes on the scene like a stealth fighter. She has secrets and is on a mission to find out the truth. She is like a chameleon–she will be what you want her to be, so she can get close, but once she’s in, her true mission is revealed.

Is a wise soul who has seen a lot and done even more. A careful planner, The Brain has made a major impact, whether good or bad, on lots of people’s lives. His past mistakes have caused him to desperately right the wrongs he’s committed. 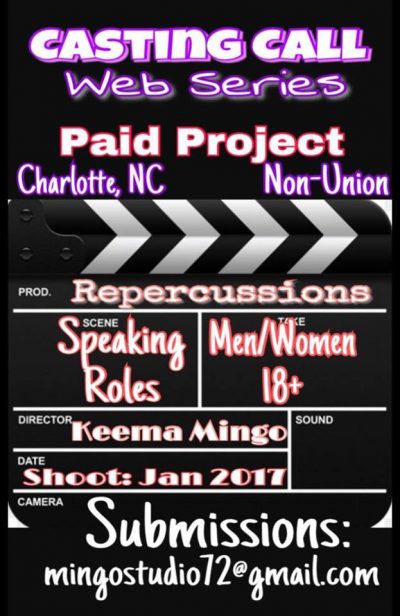 Needing Adults and pre-teens any ethnicity