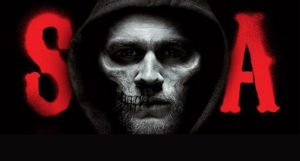 Sons of Anarchy is an American crime and drama television series created by Kurt Sutter.  It premiered on FX network on September 3rd, 2008 and continued for seven successful seasons.  The show averaged an impressive 5 million viewers per week, making it FX’s highest rated series ever.

The show is about a motorcycle club called the Sons of Anarchy.  They are not your ordinary club however, because they are one of the 1% of biker gang.  The “One-Percenters” is a nickname given to the small minority of motorcycle clubs that are outlaw gangs.  The Sons of Anarchy club is a group of men and women that pride themselves on protecting their family, homes, property, and livelihood.

In short, the series deals with plenty of violence, drug activity, robbery, and crimes.  There are several main characters; from the Club President Clay Morrow (played by Ron Perlman), the Club Queen Gemma Teller (played by Katey Sagal), or the young apprentice and heir to the throne, Jaxon Teller (played by Charlie Hunman), there is plenty of drama.

With the success of Sons of Anarchy, FX just announced that they are creating a spin-off series based in the same world.  The show is called, Mayans, and it is based on the Sons of Anarchy’s rival gang throughout the seven seasons.  The Mayans Motorcycle Club caused plenty of drama with the Sons and their crew, and fans are very exciting to jump back in the enthralling world created by Kurt Sutter.

FX will soon be casting for this show, so keep an eye out for open calls in your area.  Sons of Anarchy was mainly filmed in California, Nevada, and New Mexico. They will need multiple extras and featured roles for another epic series!