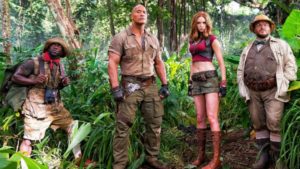 The casting department for the upcoming sequel to Jumanji needs extras and stand-ins to fill roles for a scene.  Jumanji is a fantasy/adventure film directed by Joe Johnston in 1995.  It starred beloved actor Robins Williams, along with Kirsten Dunst and Bradley Pierce.  It is about an enchanted board game that comes to life and effects the main characters living world.  Despite critics mixed reviews, the movie grossed $262.8 million and is considered a classic.

The new Jumanji stars Dwayne “The Rock” Johnson, Karen Gillan, Kevin Hart, and Jack Black!  This star studded feature film will be about the infamous board game that caused the original characters loads of turmoil, but it will take place in a very different setting.  The new version takes place in a mystical jungle, where explorers stumble upon the ancient board game and are forced to face the wrath of their dice roles.

This is a great opportunity to be apart of a feature film with famous actors and actresses.  You will gain experience and meet people that can show you how to be the best extra or stand-in that you can be.  A stand-in role is vital to many scenes because you are mimicking one of the main characters, so this will look great on your acting portfolio.

Contestants Required for Taking Part in Miss Christmas of Southport 2016