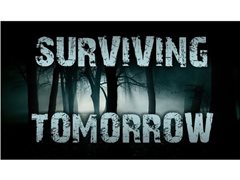 Facebook
Twitter
Google+
Pinterest
WhatsApp
‘Surviving Tomorrow’ is a 10 minute short apocalyptic thriller film following the story of Will Dawson (21-35), the lone survivor of the apocalypse. After being diagnosed with a brain tumor before the infection broke out, he realises it is because of this he is immune to the infection and the infected. However when he wakes up in a hospital bed at the end of the film, all is not as it seems.

This is a student film for a Final Major Project for the University of Salford. The film will be shooting in late March/ early April, taking around 5 days to complete.
Some parts have already been cast but we will be holding additional auditions on Monday the 7th of March 2016 at Media City UK, Salford, however if unavailable an alternative date can be arranged.
All Actors will receive a copy of the script with a highlighted section that will be used for the auditions.

The production will be filmed with broadcast quality equipment and edited with Adobe Premiere and After Effects.

The film will be uploaded online in late April/ Early May and will be submitted to forthcoming film festivals.