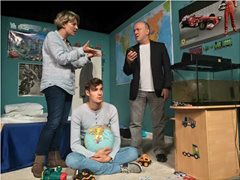 We are casting two roles for our forthcoming production at the Brighton Fringe (5-8 May) following a string of previews in Eastbourne (25-29 April).

The Bula Loop is a poignant and darkly comic piece following a day in the life of a family living with autism. Adam dreams of travelling the world on a ‘Bula Loop’ round-the-world air ticket, but, when his brother gets there first and announces his gap year plans over dinner, the family are forced to face some crucial questions… How will this family cope without him? Who will help with Adam? Who ate all the brownies… and where has the ketchup gone?

BRYONY (17-26, any ethnicity)
Determined and wilful. A very strong character. Says a little too much at some points, much to the annoyance of the family that she makes herself a part of since her mother died.

OSCAR (17-26, any ethnicity)
Emotionally taught. The younger brother of Adam although acts like the eldest in the way he cares for him. He is keen to escape and see the world.