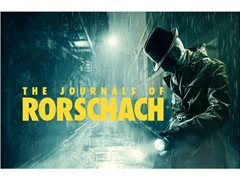 THE JOURNALS OF RORSCHACH is currently on Kickstarter for £5000 but reaching for £10,000 via our stretch goals.

We are looking for actors and actresses to get involved early on in the production of this film.
The Kickstarter campaign will be up for a month and after that time will be when we commence filming.

So spread the campaign far and wide because the more backers we get, the more we will have the budget to pay you for your talent and time.