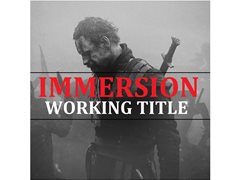 THIS IS A GENERAL APPLICATION FOR ANY ROLE. IF ANY PARTICULAR ROLE INTERESTS YOU, PLEASE STATE SO IN YOUR APPLICATION. IF/WHEN YOU ARE CONTACTED, SPECIFIC ROLE DETAILS WILL BE DISCUSSED.

Roles include:
– Vincent (50s), the director who casts Tyler
– Dad (40-50s), Tyler’s father
– Troy (30s), the actor initially cast as Macbeth
– Other members of the Macbeth cast
– Dad (40-50s), Tyler’s father
– First and Third Assistant Directors on “The Laneway”
– “The Laneway” male and female leads (early 20s): These are the actors from the film that Tyler works on as an extra
– Various crew members for “The Laneway”
– Extras to fill a theatre during the film’s final scene

NOTE: Auditions will be held on March 7th/8th. We will contact you if we would like you to audition. If we don’t contact you for an audition, you are still welcome as an extra and details about the shoot’s requiring extras will be delivered to you as soon as they are available.

SYNOPSIS
Tyler is a 22 year old amateur actor desperately fighting his way into the business. When a prominent film director notices Tyler’s outstanding work as an extra on the set of his latest film, he decides to cast him in his next project: a screen adaptation of Shakespeare’s Macbeth. Tyler’s social circles initially ignite with excitement over his success, but as the freshness of his casting fades, so too does everyone’s interest in his endeavours. Thus, Tyler begins to dismiss his relationships as he dives deeper and deeper into his character, leading to an eventual unravelling that may not only terminate the affection of those that love him, but cost him the role he sacrificed it all for.

ESSENTIAL DETAILS
– 6-7 days of shooting: most supporting roles and extras will be required for max. 1-2 days (SOME SCENES WILL BE SHOT LATE AT NIGHT)
– Rehearsals may be applicable to your character
– Shooting days may be widely spaced, so be prepared to shoot anywhere from late March through to the end of April
– Must be open to improvisation
– Must be able to develop character independently
– Must be comfortable with the coordination required to shoot extended tracking sequences with dozens of other extras and crew