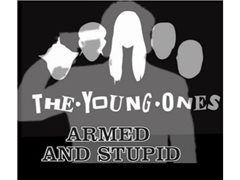 Facebook
Twitter
Google+
Pinterest
WhatsApp
I am a writer/director/actor who for the past 7 years has become a moderately well known Youtuber thanks to my work as in Double Act Chrosstopher, as the creator of the popular Sherlock Holmes web drama comedy “No Place Like Holmes”, and more recently for the comedy sketch show “The Faction of Farce.”

Aside from my work on the web I have written for comic books, television, feature film, shorts, and published books.

In a nutshell, what am I doing here?
Making a fanfilm British version of the unseen and unsold American remake of a cult British 80’s Sitcom “The Young Ones”. Yes, that is right. A British show converted to an American show reconverted back to a British show.

Some of my earliest work as part of Chrosstopher was the web series “The Younger Ones”, a fan tribute carry on show of the 80’s cult sitcom “The Young Ones.” Despite the super basic production values (first thing we ever really did on Youtube) it found an audience, and in itself got a cult following. The success of which led to myself and my double act partner taking the act and sketches live. Performing all around London in clubs, pubs, shows, and comedy clubs including The Comedy Store and Hackney Empire.

My love affair for the show really relates to my huge admiration for the late great actor Rik Mayall.
The show would go from strength to strength until my partner finally decided to call it quits before we really managed to fully take ourselves to the next level. A major shame to myself and fans alike.

So, what is this about an American version?

At the end of 2009, I was contacted by one of the crew who worked on the never aired pilot episode of “Oh No Not Them”. The 1989 American Remake of The Young Ones.

The show was never bought, and never aired. Who knows if a copy even exists.

This crew member gave me the script he had for it. He had seen what we had been doing, and thought if anyone could bring the world the pilot at this point, it would be us. He asked if we could do an episode based upon the concept and show the world what was once planned.

Sadly, by this point, it was too late. My partner had since left his creative dreams and moved onto another area of work. But I promised I would one day make it.
6 years has passed, and that day is today.

I have more experience, more respect, more support, a reputation for getting things done, and more knowledge than ever before. So, one last time shall The Young Ones rise again.

However, what I am not doing is just using the American script. It has since been rewritten by myself to bring it more in line with British humour and the spirit of the original.

I am pushing for a indiegogo campaign to raise money for the props and costumes, but also so that I can least give the girls and guys who give up their time for it some expenses for it if all goes as planned.

This is an abridged version of what I have put on the Indiegogo campaign. Please go there for the FULL story and info.

The main roles will be for 2-3 days spread across March-May likely.
Filming will take place in Kingston Upon Thames, Surrey.

Others will be small and shootable within 2 hours with flexible options for shooting if they are not character heavy scenes.

Summary of Benefits
– Travel Expenses and Food on Set
– Imdb Credit
– Chance to be in something that will be alot of fun and likely attract a fair bit of attention for what it is.

You must be able to record an audition tape.